Who is Nick J. Cox and why is he the most important person in science?

This quote, possibly the first recorded humblebrag, is how we often think science progresses. It is demonstrated nicely in my favourite documentary ever, Simon Singh’s Fermat’s Last Theorem, which tells the story of how Andrew Wiles would go on to solve this centuries-old math problem. It is an amazing story in so many ways and it is really worth watching it all. However, one part in particular always stands out to me and it appears in the very last minute of the documentary, while the credits are rolling. A long list of names of all the great mathematicians - who Andrew Wiles uses in order to solve the problem - are simply, read out.
I do, however, dislike this theory (not Fermat's, the giant's shoulder one) because I feel it places far too much emphasis on the importance of great individuals. This way of thinking is an important part of where I think science goes wrong. In order to explain this, I am going to spend the next 5 paragraphs talking about a statistical software package...
Many economists use data to answer questions about the world and we need some sort of statistical software to do so. One of the most common ones in use has been around since the 1980s is called Stata (definitely, not STATA*). It looks like an old Atari game** and I have spent many days and nights staring and swearing into this screen while getting endless replies of Syntax Error, R(198).
So let's say you get some data, load it into Stata, and you realise that the dates are in a weird format Y'68MDEC05, Y'65MJAND2 etc. Why on earth someone decided that this was the best way to write dates is anyone's guess, but it happens all the time. Perhaps because the East German who wrote it in 1978 was drunk on Mecklenbuger Punsch and had grown tired of life. His only solace was the knowledge that this decision would really screw over someone in 50 years time, perhaps someone living in a small cathedral city in the north of England. Who knows? All that matters is that it is your problem now.
You figure out that Y'68MDEC05 is actually December the 5th 1968 and you need to decode these dates into a format Stata will understand. So you decide you are going to manually change each one and a few hours later you realise that it might take a little longer than expected (manually decoding 95,325 birthdays of former DDR citizens takes quite a long time apparently).
Although you can quite easily explain to a person how to decode this date, in Stata (as in any computer language) it is much harder. No amount of pleading and begging will help (believe me, I have tried). The answer, like all things in life, is to google it.
You type into google "weird date stata help drunk stasi" and amazingly someone has asked a similar question to you before! Someone has even replied giving the code to solve the problem whilst simultaneously chastising them for not reading the help file! Over time, problems like this keep coming up and your random googling keeps giving you the answers - you notice a pattern. One person seems to be answering all these idiosyncratic detailed questions: Nick J. Cox.
Since 2014, Nick J. Cox has posted on Statalist, Stata's dedicated messageboard, over 20,000 times at a rate of nearly 10 posts a day (he has been posting before this on old servers so the number is likely far higher). He has answered questions from undergraduates to Professors, at all levels of difficulty, and as a result, has probably increased the productivity of countless academics. Remember its not just the people who he replies to that benefits but the people that view his replies, like the example above. And it is not just economists that use Stata but a whole host of social scientists and biostatisticians and even epidemiologists.
If you look at his rank in terms of citations he is number 35 in economics, just behind two little known economists Paul Krugman and Ben Bernanke. He is ahead of many people on this list who have been awarded Noble prizes. So you would think, after all this, that Nick J. Cox would be showered with academic achievements and writing columns in the New York Times or being head of the US Federal Reserve. 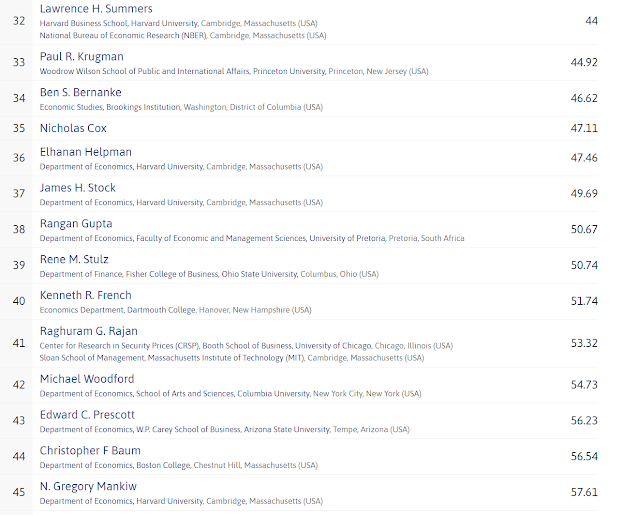 The thing is, Nick J. Cox is not even an economist, he is an Assistant Professor of Geography at Durham University***. He is not as famous as other people on that list for one reason: academia cares only about your publications. We reward the goal scorer and not the person who made the assist, let alone the defensive midfielder who does all the work and goes unnoticed. Sadly, the way academia currently works is the equivalent of putting 11 strikers in a football team, thinking it is the best way to win matches
Science is a process of discovery. If Sir Issac Newton hadn't discovered gravity, I am fairly certain someone else would. And in order to make scientific progress, we have to make this process as efficient as possible. People like Nick J. Cox are such a good example of this because he has increased the productivity of so many researchers (If anyone wants to work on a paper trying to show just how much he has had an effect, I would be interested).
OK, Nick J. Cox may not be the most important person in science but I do think what he represents is: the idea that science is more than just end process, the individual who makes the discovery. We are not just standing on the shoulders of giants, we are standing on the shoulders of everyone involved in the scientific process, regardless of height advantage.
*Some people think it is spelt like this as a result of the old logo. But DO NOT spell it this way or you will get shouted at.
**OK, the new version looks a bit more modern with the white background but I was brought up on Classic view and I will die with Classic view.
***In the 5 years I have been in Durham I have never bumped into him, I am beginning to expect he is just a benevolent A.I. sent by the Stata God. I am also slightly worried if I bump into him he will tell me to read the help file (although, you really should read it before posting on the message board).
Posted by David Chivers at 06:11