Socially Distanced Football: Can you modify football so you can still play while social distancing?

The basics of social distancing is that if you are symptom free, you can meet with people outside but have to be 2m apart. Also passing things to each other with our hands could also potentially spread the virus so this should also be avoided. This makes a lot of sport impossible to play (unless you like golf).
So I have tried to adapt football to adhere to social distance rules and I think the game actually sounds quite good in theory. It definitely teaches more about positional play and avoids you being two-footed by a red-faced centre back.
There is a big disclaimer here, I am not an expert in how the virus spreads and haven’t thought all of the consequences through. Also, our knowledge of how the virus spreads will change by the day so this may change the rules slightly or make the game unplayable. So what I am saying is, if this becomes a massive thing and the virus spreads even more as a result of it, I really do not want to be held responsible for the avoidable deaths of thousands of people.

If you also don’t want to be responsible for thousands of avoidable deaths then I suggest you follow social distancing rules. As I am writing this people are still gathering in crowds and it is likely we will be in lockdown soon.

The rules are basically the same as football with a few alterations to the pitch and certain things borrowed from basketball and volleyball. This game is set up for a 5-a-side match but I am pretty sure you can adapt it to how many players you have by moving the boxes around.
The pitch consists of boxes. Each player must stay with within their own box during play. The boxes are all 2m apart and this creates a deadzone which I will call the 2m zone (if I was a kid playing this everyone would call it the coronazone but as I am an adult this is really inappropriate). 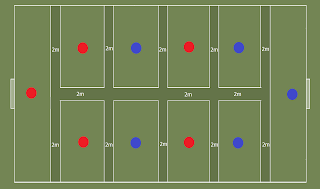 You are not allowed within 2m of anybody in any circumstance.  Not your team or the opposition players, not when you score a goal or after the game is over. If anyone doesn’t adhere to these rules, they cannot play.

The game starts with one team’s goalkeeper having the ball. Let’s call the team that starts with the ball the offending team, and the team that doesn’t start with the ball, the defensive team.
You must stay inside your box during play. You can dangle a leg into the 2m zone to intercept a pass but you must not place a foot down or it is a foul.
You are only allowed 7 seconds on the ball before you have to pass or shoot but you can
take as many touches as you want in that time.

The ball cannot be kicked above waist height
Everyone must use their feet, including the goalkeeper*
Teams can swap positions when the ball is out of play.

There are no free kicks, throw-ins or corners. The only way play can restart is giving the opposition goalkeeper the ball.
Restarts occur when:

a) A goal is scored.
b) A rule is broken (e.g. a player enters the 2m zone)
c) The ball goes out of play (this includes the 2m zone). The team that touches the ball last gives the ball to the opposition goalkeeper.

The GK always starts with the ball and they start play.
The defenders of a team incorporate the goalkeeper and the two closest players to the goalkeeper. The Forwards are the two players that are higher up the pitch and are separated by the opposing team’s players.
The max pass rule means that defenders can each have the ball only once between themselves before passing forward or shooting (if they must).
Forwards can have the ball only once between themselves before shooting or passing backwards to defenders.

If the defenders receive the ball from forwards then the max pass rule is reset: each defender can only have the ball once before passing forward and shooting.
If the defending team intercepts the ball, they become the offending team and the offensive rules apply to them.
For example, the goalkeeper passes to the right-side defender who then passes to the left-side defender. They then pass the ball to the left-side forward who then passes to the right-side forward. The right-side forward can either shoot or pass back to any defender, but they can’t pass back to the other forward again until it has been passed back to a defender first.
This rule (although a little complicated on paper) avoids teams just passing it back between themselves like England defenders at a major tournament. Allowing forwards to pass the ball back to defenders is designed to make for more interesting styles of play. Also, the opposing team’s forwards can try and intercept the ball if the ball is passed back to defenders. Basically, if you didn’t have this rule, the ball would always have to go forward and play wouldn’t last very long.

I originally started this as something to do on a Sunday with no football on the tele. But worryingly, I have convinced myself that this game doesn’t sound all that bad. It would be good if someone could make a FIFA mod of it to see how it would work.
I have never written anything like this before so comments from referees, football tacticians, and most importantly, virologists and epidemiologists, are most welcome.
Finally, If you end up playing it in the park you are going to need a lot of jumpers.

*Perhaps when information changes about Covid19 you could have the GK using their hands and allow the ball above head height, but I am erring on the side of caution on this one and I want to encourage position swapping. You also now have a legitimate reason to pretend you’re René Higuita.