Misleading Words: why we need to rename "statistical significance"

What is the definition of arachnophobia, equinophobia & hippophobia? If you said they are all fears relating to spiders, horse and hippotamus then you would be wrong. The correct answer is spiders, horses and horses, respectfully. Most people will be aware that phobia means fear and perhaps know spiders relate to arachnid and equine to horses. Many of us will be less familiar with the fact that hippo is actually related to horses unless you have heard of this before (or are a 2000-year-old Athenian). The way we often understand new words is through inference: a way of narrowing down the answer. We do this all the time without thinking like with “lexically ambiguous” words. If I said “there were bats flying around my house last night”, the context helps us understand that this is referring to the animal rather than cricket bats. We do the same kind of thing when we learn a new word. Often words contain clues within the word itself or in the context we use them. For example, let’s make up a new English word called “worseimprovement” based on the direct translation of the German word, Verschlimmbesserung. You may already have a vague idea of what this means* - and you should guess now before reading on. But if we used it in context it’s easy: “I added more spices to my dish but it ended up a worseimprovement”. We don’t really need to offer a definition, as it should be obvious that it refers to a situation where we try and make something better, but it ended up worse. Words, however, do not need to contain any relevant information at all. We can define a word however we want, as long as people are on the same page. For example, if we were to rename “banana” as “orange”, what fruit is the man in the picture holding? 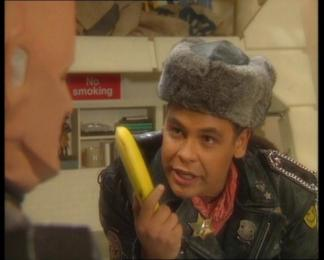 If you said “banana” you are wrong, it is an “orange” - we have literally just been through this guys. It really doesn’t matter what we call this elongated yellow fruit as long as we all know what the name we give it refers to. Problems, however, can occur if we were to keep up this definition. People who haven’t read this article may be perplexed if you said you hate the flavour of oranges and see you downing a Fanta**. This isn’t always a massive problem. For example, Egregious is now a negative word when it originally meant "distinguished" or "eminent”, it was used in an ironic way to such an extent that the definition has changed over time. However, there are some words or phrases which can lead to incorrect inference. I think I will tentatively call them "misleading words", but I am worried that this may actually create a "misleading word" in itself. The word "fertility" is a misleading word when it is used in the technical sense: how many children a woman has had. This can lead to lots of problems like saying women are now less "fertile" in their 20’s than their grandmothers were in their 30’s. If you read this without knowing the technical definition, you probably would think it means women are somehow biologically less able to give birth now, than before. Another example of a misleading term is something I use a lot and can be seen in the following sentence: “Drinking urine makes us live longer and this finding is statistically significant.” Most people will think the “statistical” part suggests that some sort of statistics are involved and it’s science-related (and they would be right on this). “Significant”, however, usually implies noteworthy, something that commands attention. This is definitely not what statistically significant means so please don't think that (for the actual meaning, I have heard there is a good book out at the moment that explains it well). Drinking urine could literally only increase your life by 10 seconds, and the findings could be statistically significant. This does not sound like “significant” in the everyday use of the word, so if you started drinking your own urine as a result of this misleading word, I think you have a right to be annoyed. Trying to get everyone to understand what the term actually means is really difficult. Yes, it isn't a problem if people who use it understand it, like the banana/orange example above, but we rarely think about the consequences when the word starts getting used with people who are not privy to the definition. They will do what we all do and use inference to get an idea of the word and be badly misled. As a result, I think the best thing to do is to change the name of statistical significance to something else, like statistically detectable (it is worth thinking about what we exactly change it to carefully though). It may take some time, but I think with a bit of coordination it is certainly possible. If we can change the name of a Marathon Bar, we can do anything. *Inbesondere wenn Sie Deutsch sprechen. **I am aware there are other flavours of Fanta, but if I said Fanta Orange here you may think it was referring to a banana.